Abstract artist Curtis Stromme will be demonstrating at the October 11 meeting of the Amador County Artists Association.  The meeting will start at 7 p.m. in the Jackson Senior Center at 229 New York Ranch Road.

Stromme realized quite early that creating acrylic abstract paintings was what brought him pleasure. Utilizing paper rather than canvas, he applies acrylic paint with blocks to create vivid compositions.

Some start with an intense blue background with additional colors skidding across the surface and sometimes colliding with those applied earlier.  The layers of paint create a textural surface and metallic swirls and lines add vivacity.

The public is invited and refreshments will be served. 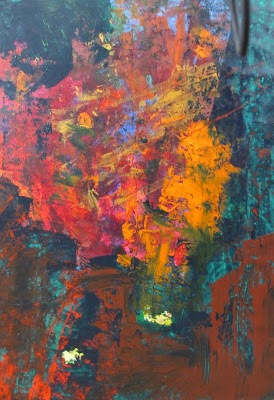 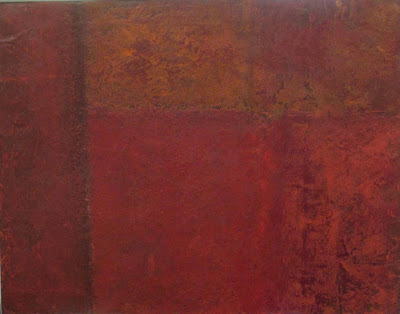 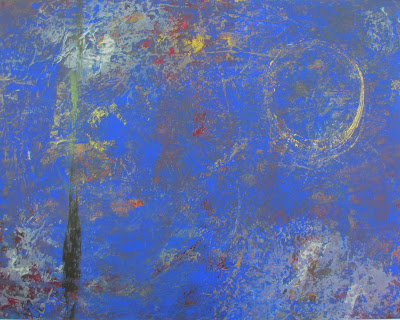 Posted by Carol Harper, Community Media at 10:48 AM No comments:

Gallery 10, Sutter Creek, will be celebrating 22 years as a premier spot in the foothills for showing Fine Art by having an Founding Members’ Invitational! Several of the original members of the gallery will be showing the paintings and sculpture they have done recently, and we will hang paintings by other original members as well.

George McCann is currently showing his metalwork sculptures at the gallery and will bring paintings to show as well.  Cathleen Berglund has some exciting new paintings to show.  Jan Stevenson will be coming from San Francisco to show her work.  We will also feature paintings by Molly Kohlschreiber and Alice Duke.

Gallery 10 was founded in 1995 by several local artists who wanted a space to showcase their artwork.  Alice Duke and others were having lunch at Susan’s Place on Eureka St., and noticed that the space next door was vacant and for rent.  It had previously been a stained glass studio, and before that a hardware store.  It seemed an ideal spot for an art gallery!  The artists got to work, invested some time, money and energy into transforming 15 Eureka Street into Gallery 10, so named to feature “the best!”

A reception honoring these founding members of Gallery 10 will be held on Saturday, September 2, 2-5 P.M.  Everyone is welcome!  The gallery will show these works all month during open hours, Thursday-Monday, 11-5, at 15 Eureka Street, Sutter Creek.

Cathleen Berglund is quite certain she was carrying a satchel containing a sketch book when she was born!  She has filled a thousand sketch books in the 7 decades since then!  She studied art primarily with Maurice Lapp at Santa Rosa Junior College, whom she credits for her pronounced sense of color, balance, and humor. Her art has appeared in festivals and galleries in California, Washington State and Minnesota.  Cathleen joined forces with local artists in Amador County in 1995 to form Gallery 10.  She managed the gallery for several years, and is honored to be featured in this collective show. 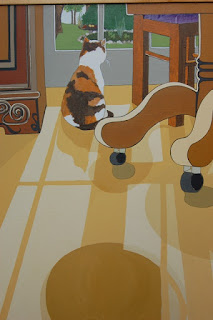 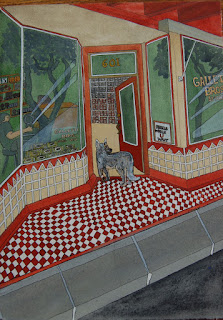 George McCann is a painter and a sculptor.  “My work, although often inspired by the natural world, is completely imaginary!”  George says.  He hopes it is perceived as whimsical and unique.  He considers himself a versatile artist, using a variety of mediums.  George has worked as a graphic designer for various industrial establishments, as well as a college instructor in drawing and design.  George uses gessoed boards with watercolor and lead pencils,  and he makes encaustic paintings using a blowtorch to fuse oil paints and beeswax on non-tempered Masonite.  He creates sculptures with soldered and wired copper and/or brass. 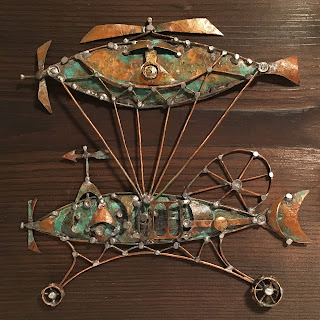 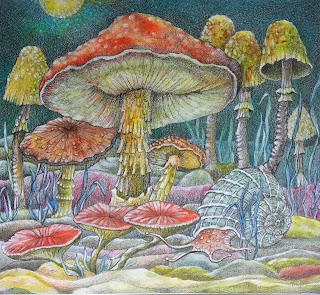 Jan Stevenson received her degree in art history from USC and a teaching credential from Cal State LA.  Jan began painting in watercolor, went into encaustics, combined with acrylics and collage. She lived in Amador County 20 years before moving to San Francisco, where she took classes and workshops in oil painting.  “Oil is my passion!” Jan says.  “I wish I had started earlier!”  Jan has attended workshops and art classes her whole life, saying, “You can always learn something!”  She taught Art in the Schools in Amador County and ran children’s workshops out of her studio many summers.

Molly Kohlschrieber has a large collection of watercolors and mixed media which she exhibits at Gallery 10.  She is known and admired for her paintings of horses.  Her landscapes, which are often of the canyon country in the Southwest, are made by incorporating a photograph with watercolor in such a way as to be a celebration of color and design.

Alice Duke was a founding member also, and was known for her watercolors and etchings of local landscapes.

Posted by Carol Harper, Community Media at 8:53 AM No comments:

Artists create using all sorts of surfaces:  canvas, paper, and boards of all types.  Leanne Kelly’s primary “canvas” is a gourd.  She carves and burns designs into the surface; applies paint, ink, wax and stain; and embellishes with beads, feathers, jewels, yarn and pine needles.  In her hands, the final products are truly works of art.  Among these are her very popular necklaces, gourd baskets—some quite tiny—as well as lamps and other decorative items.  These unique artworks will be featured during the month of September at Sutter Creek Gallery.

Leanne Kelly is an indigenous artist of Onondaga/ Potawatomi descent. Her work is greatly influenced by her heritage and her love of the outdoors.  Many of her designs contain multiple tribal influences, including Eastern Woodland, Pacific Northwest, Plains, and the influences of the Native American Church.  Kelly creates her work as a form of meditation and a way to share herself with others.  “If my pieces bring joy and wonder to those who see and hold them, then it is worth every second it takes to make them. “

Sutter Creek Gallery invites you to meet Leanne Kelly at the September 2 reception, starting at 2 p.m., to view her exciting and unique creations, including colored pencil portraits of French mastiffs, which she breeds. She is one of the many local artists exhibiting at the cooperative located in the heart of Sutter Creek at 35 Main Street.  Besides original paintings and photographs, Sutter Creek Gallery offers many affordable items including prints, cards, jewelry, ceramics and fiber arts.  The gallery is open Sunday, Monday, Wednesday and Thursday from 10 a.m. to 5 p.m., Friday and Saturday from 1 a.m. to 6 p.m.  For additional information, call 209-267-0228, email suttercreekgallery@gmail.com or visit www.suttercreekgallery.com. 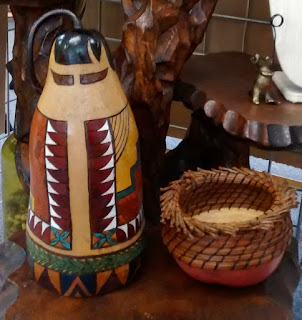 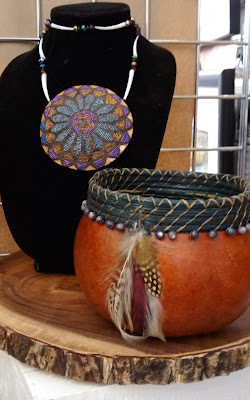 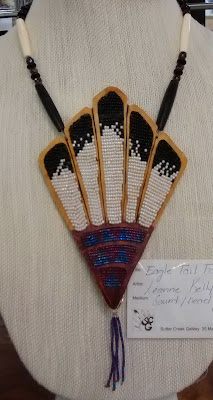 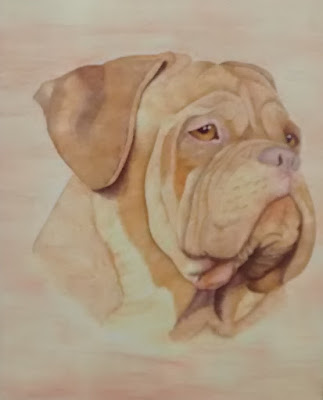 Posted by Carol Harper, Community Media at 8:27 AM 2 comments: